10 Reasons Why the Seoul Subway System is the Best – Seoulistic

10 Reasons Why the Seoul Subway System is the Best Jalopnik.com rated the Seoul subway system number 1 in the world. It is of course totally arbitrary and subjective. But a number of other sites agree too (top 10’s in HuffingtonPost.com, TorontoSun.com, AskMen.com)! We’re here to give you 10 reasons why the Seoul subway should officially be #1! If you’ve experienced the cold in Korea, you might have to learn a few ways to survive the cold. But if you’re lucky enough to grab a seat on the Seoul metro, you might not need them! The seats of the Seoul subways are all heated to make sure your butt stays nice and toasty during the cold Korean winters. Let just hope you don’t get too comfortable like these guys 😉

Seoul has such advanced infrastructure that it’s been offering cellphone service on all Seoul metro rides and stations. Oh, and that was more than 10 years ago. Now there’s all different kinds of paid and non-paid services for wifi connectivity, and free connections for all types of other networks: cellular, 3G and DMB (TV signals for cellphones). Basically what that means is: In Seoul, you are always connected! Sticking with the technology theme, nearly all of the newer Seoul subway trains are equipped with screens that bring you service announcements, upcoming stop names, international news, stock prices and football highlights. You won’t forget what the next stop is even after watching Cristiano Ronaldo score a hat trick. Really old subway systems around the world generally have smaller train cars (people were just so darn small back then!). But Seoul’s subway system is pretty modern and so the newer subway trains are generally pretty big and spacious. And yes, some trains do get quite crowded during rush hour. But if you’ve ever ridden the Seoul subway on a laid back Sunday afternoon, you’ll be quite surprised at the legroom. 🙂 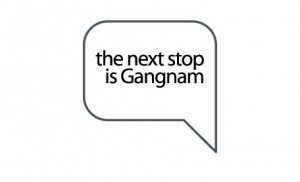 Tourists should certainly love the Seoul subways. The English, Japanese and Chinese announcements are always super helpful. Not all Seoul subway stops are announced in these other languages, but most places that interest tourists are. And although the announcements are a little bit robot-y, it’s better than not being able to understand a word the conductor says! Seoul has been aggressively expanding its subway system in recent years with the addition of new lines and extensions of existing ones. And what that means is brand spanking new and very clean stations in cool areas that matter. Shinnon-hyun Station of the new Line Number 9 developed one of those iconic Korean cafe streets ever since the station’s opening. And Apgujeong Rodeo St. Station? Pfff… That place has been bumpin’ for years, the station’s just new! It’s so nice to have fresh new stations everywhere :). The gates on each platform only open when the train is there; they also prevent any accidental slippage onto the tracks. In addition to that, Seoul is pretty low on violent crimes and riding the subways can feel safe, sometimes even late at night! This subway line is a godsend for Seoul tourists as well as residents. The iconic green line is home to many of Seoul’s most popular spots, such as Gangnam, Myeongdong, Dongdaemun, Hongdae and more. It’s also great for transferring to other lines. Remember this subway line if you love hanging out in cool places 🙂 All this good stuff and the subway still only costs 1,050 won (approximately $1USD) for basic fare. It’s definitely not the cheapest in the world, but compared to subway prices in different parts of the world and with all that technological goodness (and free bus transfers to boot!), that’s a deal!

What do you love about the Seoul metro system? Let us know in the comments!