How to Ride the Seoul Subway Like a Local: Etiquette and Tips – Seoulistic

How to Ride the Seoul Subway Like a Local: Etiquette and Tips If you’re traveling to Korea, you will most likely find yourself using the Seoul Subway system. It’s fast, cheap and convenient. But before you hop on that train, you should read this post so you know the subway etiquette in Korea!

So maybe you decided to go hiking at Bukhan Mountain and you’re on your way back. You’re sweaty, stinky and most of all tired, but all the seats are taken – all except for the priority seats at the end of the subway cars. You might be tempted to sit there, but you shouldn’t. Here’s a little secret… it’s a death trap! Well… culturally at least. Korean people really don’t like it when non-pregnant, non-elderly, uninjured people sit there. Even when the Seoul subways are extra full, people will avoid sitting there because they want to make sure that people who actually need those seats can sit down easily. Also, they are afraid of Korean stank eye. Scary!

Tip 1: These seats are also reserved for little children as well.
Tip 2: Koreans usually don’t sit there, and think “I’ll just get up when someone comes.” Leaving those seats empty is normal protocol. Try to do the same 🙂 Give Up Your Seat To Be Awesome!

If you’re sitting in the middle seats, you’re totally ok to just sit and watch that last episode of Gossip Girls on your smart phone. No one will say anything, and they shouldn’t! But… if you want to be an awesome Seoul subway rider, you should give up your seat for those that need it more than you do. That means pregnant women, the elderly, injured people, and in Korea… children! One of the awesome things about Korean culture is that it’s focused on helping each other, and the subways are really excellent places to see this in action. Help out a Korean that needs a seat, and the mayor of Seoul might just give you the totally unofficial “Seoul Awesome Subway Rider Award”! Yay! Be a Righty on the Escalators

Have you ever been frustrated by slow walkers? You know… those people that are always in your way and have no idea that you’re trying to get past them? Don’t be that person. Nothing’s more frustrating than congested foot traffic, and the escalators found at the Seoul subway stations are excellent places to be locked behind a Korean couple that have no idea that 32 people are waiting to walk ahead of them! If you’re not planning on walking up the escalators, stay to the right and let everyone walk past you on the left. Some people in Korea forget to do it, but keep in mind that it’s what you’re supposed to do. Also, you’re supposed to give a high five to everyone that passes you by! “Come’on ajumma, high-five!” 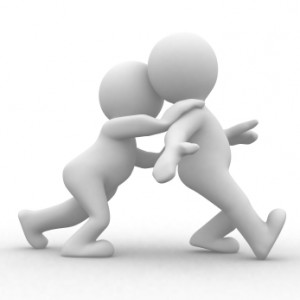 Be Cool with Pushing and Shoving

For whatever reason, a lot of Korean people don’t say excuse me on the subways. Maybe it’s their aversion of talking to strangers in Korea. But instead of a polite little “excuse me” from someone about to get off, you might just get a forearm shiver to your lower back. That’s mostly the older Korean people who are probably humming Ludacris’ Move B—- when they’re shoving people out the way. The younger people though, tend to be just as annoyed as you!

What can you do about it? Be cool homie! When you’re getting off, you can of course, say “excuse me” (see language tip below), and people will move away just the same. You have the option of shoving everyone right back too. But if you’re reading this… you’re cool! So stay cool, friends 😉 Seoul Subway Do’s and Don’ts – Stuff You Already Know (or Should!)

1. Talk at normal decible levels – that goes for phones and super hilarious jokes.
2. Sit on seats (wow, can’t believe we just wrote that!). Unless you want to make the Korean news like these guys.
3. There are plenty of trains. Try not to hold doors.
4. Seats are for people. Put your bags up on top.
5. Sleeping is ok, just don’t make the subway your bed 😉

Got any other local Seoul subway tips? Share with us in the comments section!