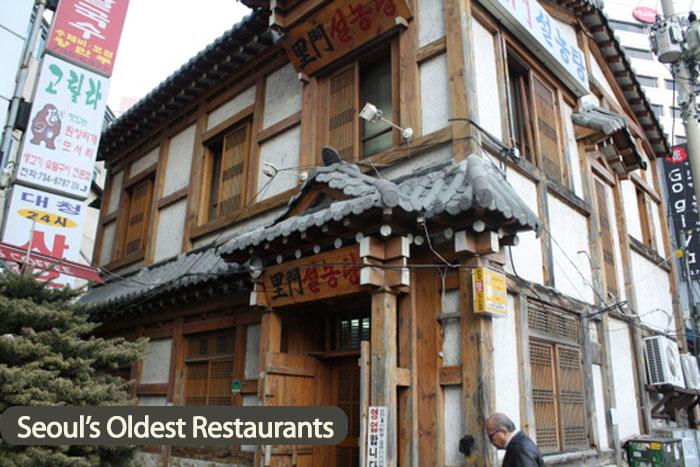 If you’ve ever lived in Korea for an extended period of time, you know how often the look of a street changes. Businesses open and close shop faster than an ajooma rushing for a seat on a crowded subway. That’s why if a restaurant in Korea has stood the test of time, the food there is bound to be exceptional. Here are 10 of Seoul’s oldest restaurants, which prove they are deserving to be considered to be some of the best restaurants in Korea. Note: Restaurant has since moved to a newer building.

Language Tip: 설렁탕 (seolleongtang) = 설농탕 (seolnongtang). The only difference? The first is more modern and the latter is old school. Situated right in the middle of the 1930’s version of Gangnam, this restaurant has served hipsters and politicians alike starting from 1932. Although the crowds have dispersed, many Seoul old timers still come back to this chueotang specialty restaurant to hang out in one of the few places that have been around as long as them (three generations of chueotang masters to be exact).  You too can sit with life veterans and complain about politics while eating chueotang soup for 10,000 won a bowl.

This Seoul hejangguk restaurant (해장국 – hangover soup) has been serving up hungover (and non-hungover) patrons for more than 70 years. Head over to this famous Jongno restaurant if you’re looking for a cure to your pounding headache or your growling stomach. Luckily for you, it won’t matter what time of day (24 hours) you go to order the famous hejangguk (해장국) or the specialty hejangguk (특해장국). This popular lunch time spot for old timers and businessmen alike has been serving some of the best gomtang (곰탕) in the history of, well… gomtang. Its time-tested recipe of 70 years cements this as one of Seoul’s best gomtang restaurants. And with hanwoo-only beef slices, excellent kimchi, free refills of soup (국말/gungmul) and kimchi brine (김치국물/kimchi gungmul), you can fill yourself up for the decent price of 10,000 won a bowl.

Tip 1: Don’t plan to eat dinner here as it is strictly a lunch-time restaurant. Closing time is 4:30 PM.
Tip 2: The branch in Gangnam is not actually a branch. Rumor has it, it was opened by a distant relative with some bad blood with the original in Myeongdong.

Some lucky ol’ chap was probably able to smuggle in a famous Pyeongyang naengmyun (평양냉면) recipe from North Korea before the Korean War. Good thing because this famous naengmyun restaurant in Seoul is still around for even President Obama to taste close to 70 years of historical naengmyun. Get some of the most famous naengmyun and famous bulgogi (불고기) in Seoul, and you have all the makings of a typical Korean family BBQ outing from 1946!

If chicken soup for the soul is what you’re looking for, this samgyetang restaurant in Seoul has been feeding hungry souls since 1960. Much like most samgyetang restaurants, you won’t find much banchan other than kimchi, but you won’t care once you know how they prepare some of the best samgyetang in Seoul. They buy chickens that were raised for approximately 49 days and add gingseng, jujube, garlic and sticky rice along with several traditional Korean medicinal herbs. Koryeo Samgyetang has exactly what you need: Korean chicken soup for the body and soul.

Finding a Korean barbecue restaurant in Seoul is easy. (Check out Seoulistic’s 10 of Seoul’s Most Famous and Popular Galbi Restaurants). Finding a good Korean barbeque restaurant that hasn’t been closed for more than 50 years is really hard. At least it’s easy to figure out their specialty is hanwoo sirloin (한우 등심/hanwoo deungsim), the only thing you can order here. Along with some of the best hanwoo barbecue in Korea, their trademark cast iron skillet and kimchi radish fried rice (깍두기 볶음밥) have been bringing customers to the door since 1964.

Have you ever been to one of these restaurants? Share your experience with us in the comments below!