5 Things You Must Know About Taking Buses in Seoul – Seoulistic

5 Things You Must Know About Taking Buses in Seoul Riding the Seoul bus is an excellent method of transportation if you’re living in Korea or even if you’re just traveling to Korea. But there are a few things that you should prepare for before you get onto a Seoul bus. Read this post to find out 5 must know things about riding the Seoul bus so that you don’t go flying, miss your stop, or be a jerk!

Seoul bus drivers are well known for their speed. Many of them drive really, really fast, enough so that you can feel a bit unsafe. But for the most part Seoul bus drivers don’t get into accidents. So although they’re a tiny bit reckless, you’re still pretty safe. That is if you holding onto something for dear life! That’s because as fast as they can speed up, they can brake just as fast. That results in a lot of Seoul commuters falling over or even flying across the bus when the bus comes to an extremely abrupt stop. If you’re riding the buses in Seoul, remember to hold onto something, almost literally for dear life!

Seoul Transportation Tip #2: Be Awesome and Get Up for the Elderly and Children

If you think you’re in danger of going flying in a Seoul bus, think about how hard it is for a little child or an elderly Korean person to hold onto dear life. Just as Korean subway etiquette says you should get up for little children, the elderly, the pregnant and the injured, you should pretty much do the same on Seoul buses. If you help a fellow Korean bus rider in need, it’ll put you in the awesome category. And who doesn’t like to be awesome??? Do it Seoul bus rider! 😀 Seoul Transportation Tip #3: Rush Hour – The Back Serves as an Entrance

If you’re ever trying to get on a bus at the peak of rush hour in Seoul, you might find yourself fighting with droves of people to get on the bus. For Seoul buses, it’s a pretty strict rule that the front is the entrance and the back is the exit. That is until there’s a bunch of people trying to get home during rush hour in Seoul. When the crowds get too big, some Seoul bus drivers will open the back door as an entrance for those people trying to get on. It’ll load the bus quicker, and doing everything as fast as possible is what Korean culture is all about! 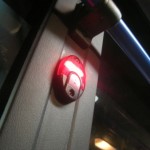 So the Seoul bus driver opens the back of the bus to let waves of people into the bus, and now you find yourself packed inside a bus with a bunch of people holding on for dear life. But lucky for you, your bus stop is now coming. You reach for the bell to let the bus driver know that you’re about to get off, but your stumbling because there’s so many darn people and the bus driver is braking and accelerating like a mad man. Have no fear. The Seoul Bus authorities have placed bells on the ceilings of buses for just this occasion! Although not every single Seoul bus will have bells on the ceilings, many of the more crowded buses will have bells on the ceilings just for this purpose! Seoulites be mad smart, yo! Seoul Transportation Tip #5: Don’t Miss Your Stop! Go to the Back

Sweet! So you pressed the bell, and now your stop is coming up. Since the bus driver is driving as crazy as a Seoul taxi, you’ll just sit until the bus comes to a total stop before you get up. And although that’s probably the safest way to do things, that isn’t the reality of taking a Seoul bus. Most Seoul bus drivers like to pick up and drop off passengers as fast as possible. And that means if you’re getting off, you should be ready and waiting to get off. If you’re riding the bus in Seoul, you have to be sure that you’re standing and waiting near the rear exit of the bus, even while the bus is moving. Otherwise, the bus driver might get impatient and you might miss your stop! “Ajeoshi!! Stop!!”

Are you a Seoul bus rider with Seoul bus commuter tips of your own? Share with us in the comments!